Sara McMann (born September 24, 1980) is an American mixed martial artist and former Olympic wrestler. She is the first American woman in history to receive a silver medal in Olympic wrestling, which she won at the 2004 Summer Olympics in Athens, Greece. She wrestled in the Women's Freestyle 63 kg or 138.75 lb weight class. McMann won silver medal in the 2003 world championships and a bronze medal in the 2005 and 2007 world championships. She started wrestling at the age of 14 in Marion, North Carolina at McDowell High School.

McMann is currently ranked as the No. 12 pound-for-pound female MMA fighter in the world by www.MMARising.com   and the No. 7 135-pound female fighter according to the Unified Women's www.MMARankings.com . As of August 10, 2015, she is #7 in official UFC women's bantamweight rankings.

McMann announced in late 2010 that she had signed a three-fight contract with Strikeforce. She planned to fight at 135 pounds. However, she did not sign on with the promotion due to an extension clause in the contract.

McMann was first scheduled to make her professional mixed martial arts debut on November 14, 2010 in Jamaica, but the event was cancelled due to safety problems with the cage.

She then had more fights fall apart after opponents backed out, including a scheduled April 30, 2011 fight against Mariah Johnson.

On May 28, 2011, McMann made her pro MMA debut at Universal Cage Combat: Revolution. She defeated Christina Marks by submission in the first round.

After ProElite reincarnated under new management, McMann faced Raquel Pa'aluhi on the promotion's first event post-EliteXC at ProElite 1: Arlovski vs. Lopez on August 27, 2011. She defeated Pa'aluhi by submission due to an americana in the third round.

McMann returned to ProElite to face Hitomi Akano at ProElite 3 on January 21, 2012. She defeated Akano by unanimous decision.

On April 28, it was announced that McMann would face Shayna Baszler in the main event of Invicta Fighting Championships 2. The event took place on July 28, 2012. McMann defeated Baszler via unanimous decision and the bout was named fight of the night. The bout was a title eliminator, with the winner scheduled to face the winner of Alexis Davis vs. Hitomi Akano

On September 4, 2012, it was announced McMann had signed with Strikeforce. She was expected to debut at Strikeforce: Cormier vs. Mir against former bantamweight title challenger Liz Carmouche,[29] but the event was cancelled.
Ultimate Fighting Championship

In February 2013, McMann officially joined the Ultimate Fighting Championship (UFC).It was rumored she turned down a fight with then-title holder Ronda Rousey. However, this was false information and no such fight was offered or even presented to McMann at the time. She became the third female to earn a victory in the UFC by defeating Sheila Gaff at UFC 159.

McMann was slated to face former Strikeforce champion Sarah Kaufman on August 28, 2013 at UFC Fight Night 27. However, McMann withdrew from the bout for, at the time, undisclosed personal reasons.In January 2015, she disclosed that the reason for withdrawing was due to her father battling aggressive lymphoma.

McMann faced Ronda Rousey for the UFC Women's Bantamweight Championship at UFC 170. She lost the fight by TKO after getting knocked down with a knee to the body. This stoppage created controversy, with some sports writers and attendants finding it premature.

McMann faced Miesha Tate at UFC 183 on January 31, 2015. Despite a strong first round, she lost by majority decision.

McMann faced Amanda Nunes on August 8, 2015 at UFC Fight Night 73. She lost the fight via submission in the first round 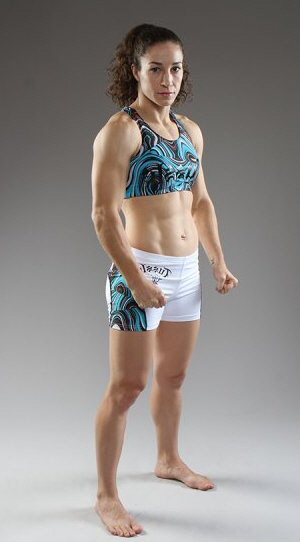